Donald does not deny the humiliating remarks he made to Alicia Machado.  What he did definitely seems to cross way over the line of human decency.  There’s a word which is maybe a little overused these days, but his behavior could certainly cause him to be described as a “bully.”

He called her “Miss Piggy” because of her weight and “Miss Housekeeping” because of her Latino heritage.  And then there is the photographic evidence he sent a media crew to a gym to film her working out when he was insulting her about her weight.  He made a public spectacle of her problem. 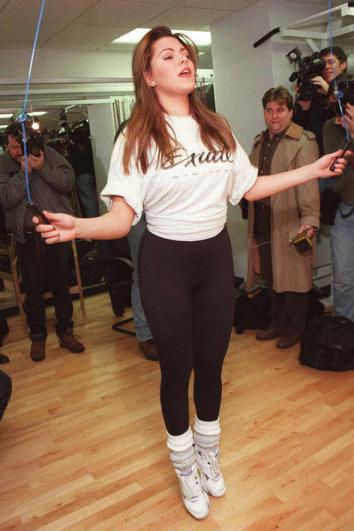 She really doesn’t look at that pudgy to me.  I certainly understand she may have violated a clause in her contract.  Is public humiliation the way to address a contract violation?

She later was accused of doing bad things a few years later. That’s no excuse for his prior behavior.  I think you could make a case that her loss of self esteem due to his bullying and psychological torture might have contributed to her life not going in a totally happy direction.

To be clear, she was accused but never convicted.  But let’s suppose she did do some unseemly things.  I’m not a psychologist but I do know that sometimes people are strongly affected by stress and/or abuse.

Might things have gone differently for her?  We’ll never know.

But more importantly, will Trump’s magic touch that may have ruined her life and definitely caused the bankruptcy or failure a number of his investments do the same for the United States?

We can only hope we’ll never know.