We are always pontificating about how our species is self-aware.  But we don’t display much actual evidence of it.

A  broader issue today is planet change, not solely climate change, but we have a hard time getting our collective heads around just the climate change component.  There are a number of other ways we are affecting our little habitat.  Now granted, these issues are interrelated, but in any case our wonderfully self-aware species is rather quickly destroying the thing we live in.

Let’s look at how we’re accomplishing this destruction and also at our efforts to course correct.

This one is the current biggie.  There is general accord that humans are affecting the climate of the planet with their burning of fossil fuels and (see below) deforestation. We’re pumping carbon dioxide into the air at a rate that is measurably affecting climate.

Regardless of whether you “believe” the science, it is difficult to imagine, looking at the busy streets in any city, that we’re not generating an inordinate quantity of emissions which might, just might, be having some effect.  We visibly saw the effects of pollution in the USA in the 70s and took steps to reign it in.  That was direct and visible proof human activities were having an effect and now, half a century later, we seem to be forgetting that was ever a problem or that human-scale actions can be affecting the place we live.

Efforts to course correct: most notably the Paris Climate Change treaty which has fallen apart due to political opposition.

The population of the planet has doubled in the last half century.  That is an incredibly short period of time.  And although population growth is slowing, thanks to birth control and family planning in most rich, developed nations, we’re still on track to double again in the near future.  The exact date cannot be predicted, but the day will come.

What’s the downside of increased population?  It affects who gets how much of pretty much everything.  With twice as many people there might be only about half as much to go around.  Now technology can forestall the consequences to some degree, such as increasing food production per acre, but as some point technology runs out, or at least becomes prohibitively expensive.

So with 2x or 4x or Nx people to share in the limited resources at some point even simpler issues become problems.  We already have problems in certain areas of the planet with the most basic necessities like food and water.  What happens as growth continues?  Only the rich will have enough to eat?  A bigger portion of your income will go towards basic survival?  It’s impossible to predict, but it does make things harder.

Now there have been doomsayers about population growth for a long time, but just because their predicted dates have come and gone doesn’t lessen the eventual reality: we will have many more people amongst whom to divide finite “stuff.”

Efforts to course correct: China is notorious for trying to limit birth rate but it is overwhelmingly seen as an area into which government should not tread.  Religion has lots of thoughts about this and trying to do anything rational appears to be a threat to religion.

We’ve got apparently large amounts of planet remaining but we’ve cut down unfathomable amounts of forest in the last half century.  Again, there have certainly been doomsayers about this, and the fact that their dire predictions have not yet come to pass may make it inviting to pretend this is really not much of an issue.  But eventually it catches up with us. 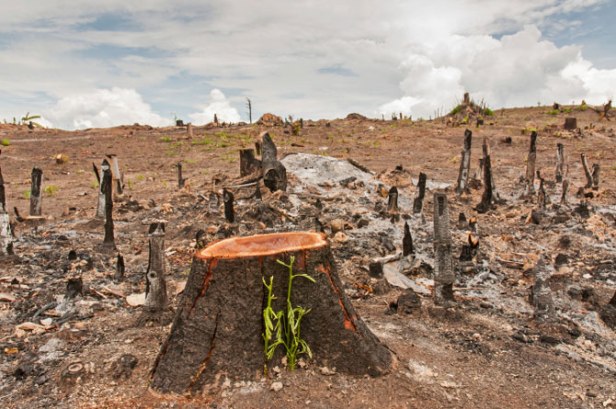 The impact of the loss of forest or  “nature” is enormous in terms of carbon dioxide of course, but also in terms of biodiversity, support for the animal kingdom, and general vegetation growth (trees put water in the air which returns as rain and helps grow other plants including “food”).

Efforts to course correct: lots of noisy environmentalists but as long as money make the world go ’round, not much substantial. Oh wait, Norway passed a law.  So there’s that.

Simply put we’re making a mess of this place.  Every day a typical city produces tons and tons of garbage.  We largely shuttle this off to “land fills” to keep it out of site, but there is an inevitable amount that ends up in the oceans or strewn about the cities and parks. And land fill space is finite.  Maybe have a look at the only semi-humorous view of the future in Wall-e.

Efforts to course correct: we’re recycling more but this may be more of a “lulling into false sense of security” thing.

Sometimes it’s tempting to think of pollution as a “solved problem.” We made tremendous progress restoring clean air and clean waters in the USA but this is not the case in other countries.  Go to Bejing, Mexico City, Santiago, Chile (to name the three places with the dirtiest air) to remind yourself what LA was like in the 70s.  Just because the richest countries have cleaned up doesn’t mean it’s something the poor countries have on their priority list yet.  And the richer countries are at risk of relapse because, as I said, it’s tempting to to think of this as a non-issue.

Efforts to course correct: the richer countries have battled pollution rather successfully in many cases, but the poorer countries are more concerned with feeding their population and have had to accept relatively make-shift approaches, e.g. only cars with even number license plates drive on certain days of the week.

This is not a planetary issue yet, but it’s a threat that is constantly hanging over our heads.  The impact on our planet of nuclear war would be terrifying and yet we continue to build more and more powerful weapons and rattle sabers at other large groups of people (countries) on our little planet, as if we could destroy them and not destroy the planet and ourselves.

Efforts to course correct: we’ve tried to constrain nuclear capability with treaties but those treaties are in the process of being dismantled because, again, this doesn’t seem to be as imminent a threat anymore.

There are many many social issues which we won’t even go into.  Let’s just keep it focused on the habitat in which we live.  But if we’re going to prosper and live up to our high self-expectations of being a self-aware species we will need to deal with:

Wealth distribution – it’s makes little sense why a couple dozen people should possess as much wealth as the poorer half of the planet.

Social equality – science says human DNA is almost exactly the same across races but we continue to divide and prefer races based on relatively superficial traits such as skin color.

Gender issues – it’s frankly hard to believe the many consider women to be inferior.  I think we can mostly agree women and men are in fact different, but taking one to be superior… I think we’re in this together.

Religion – we’ve still fighting and killing each other over religion.  While religion may be declining in its influence, it’s still a huge factor and as as long as religion exists we will do irrational things and, worst case, kill each other for it.