This meme was going around in conservative circles but there are a number of problems with it.  And even though it intends to say the opposite, it’s actually a pretty good poster child for actually doing something, acknowledging a problem, taking action. 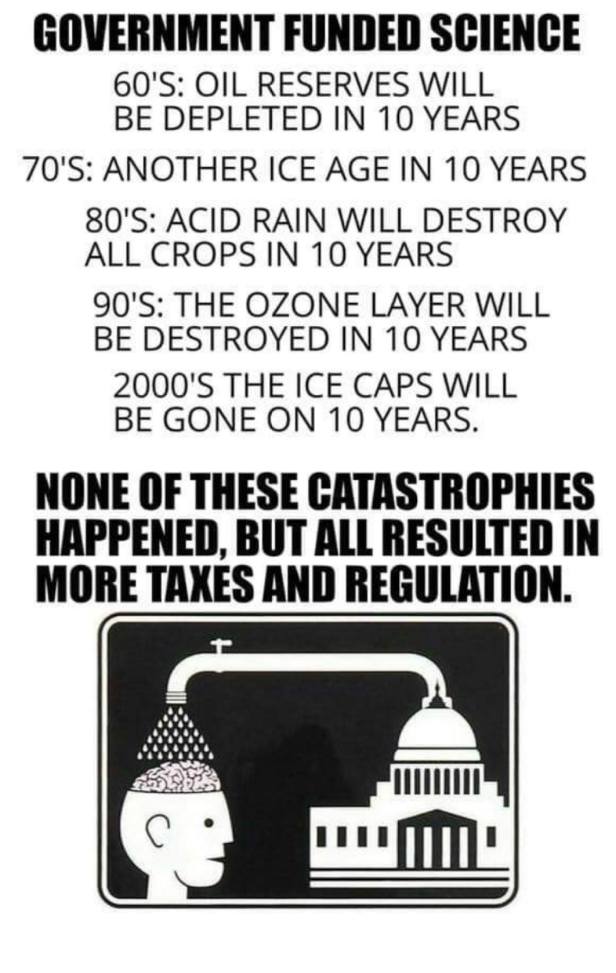 Let’s take them one at a time.  I never recall anything in the 60s about the oil reserves.  There was talk in the 80s about running out of oil in 100 years but even then no serious person was saying 10 years.

The “ice age in 10 years” is completely made up.  No serious warnings to that effect ever.

Acid rain was certainly a thing and you know what, we took steps to address it by limiting air pollution.

The ozone layer was a topic in the 70s and again by taking steps to reduce use of fluorocarbons had been largely solved by the 90s.

And now that brings us to the present (well the year 2000 anyhow) where the meme is suggesting that melting polar ice caps is not true because the other things weren’t true.  However, as noted, we took actual action, made laws, and yes regulated things to fix those other issues if they posed a real danger.  If they were totally made up, well, yeah, they never existed.

The big difference is we don’t appear to want to take any steps now.  There is some odd political bias against fixing this one.  So heck, whaddaya know, it’s probably just gonna go ahead and come true.